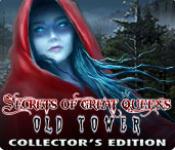 It's been many years since Queen Elizabeth's mother was tried for being a witch.

Now, an unknown foe is accusing her of the same!

Someone wants her off the throne, and they're willing to kill for it.

Can you, her trusted companion, clear her name and save the kingdom before it's too late? Find out in this riveting Hidden-Object Puzzle adventure!

Sign-up to get informed when the Secrets Of Great Queens series has new game released with BD Studio Games' FREE bi-weekly newsletter.