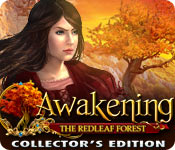 Brought to you by Boomzap Games, the creators of the Awakening series, Dana Knightstone, Otherworld, and Botanica series. Queen Sophia embarks on one final journey to rescue her parents and to defeat Dreadmyre once and for all.

Her search has led her to the Redleaf Forest where she is to find the centaur who can help her forge the Blade of Courage.

Will Sophia finally defeat the evil which has shadowed over her journey and be able to reunite with her parents? This is a special Collector's Edition release full of exclusive extras you won’t find in the standard version.