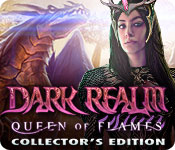 Mad Head Games, creators of the Rite of Passage and Nevertales series, proudly present an exciting new fantasy-adventure series! The evening started like any other in your village.

But without warning, a group of mysterious figures arrives and reduces the town to flames and rubble.

What are they… and who is controlling them? Your only way to find out is to flee the village and seek help from the Queen.

But you’ll have to lie low to avoid becoming another minion of the flame banshees.

Use special abilities and power-ups to make your way through a mystical world in this thrilling Hidden Object Puzzle Adventure! This is a special Collector's Edition release full of exclusive extras you won’t find in the standard version.

Sign-up to get informed when the Dark Realm series has new game released with BD Studio Games' FREE bi-weekly newsletter.