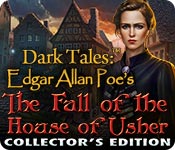 You and your colleague, Detective Dupin, have accepted an odd case at the ancient House of Usher– to find the twin sister of Roderick, who has vanished without a trace.

As you delve deeper into the mystery, the connection between the twin’s malady and the old estate appears even more entwined.

Why are townspeople disappearing? What secret is locked in the forbidden library? And can you and Dupin find the answers before more innocent victims are claimed? This is a special Collector's Edition release full of exclusive extras you won’t find in the standard version.