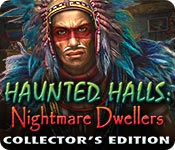 Can you find the source of the happenings and destroy it before it's too late? Find out in this thrilling Hidden Object adventure game! This is a special Collector's Edition release full of exclusive extras you won’t find in the standard version.