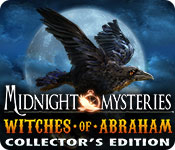 For the past few years, you've been writing bestselling novels based on the stories you've heard told by the ghosts who visit you at midnight.

But tonight you have a special visitor, Abraham Lincoln, the 16th President of the United States!

He wants you to go back in time and find the treasure of the Knights of the Golden Circle, a secret Confederate order, before Lincoln's enemies do!

Follow the clues, while learning trivia about famous people and places from the American Civil War in this fascinating Hidden Object Puzzle Adventure game. This is a special Collector's Edition release full of exclusive extras you won't find in the standard version.

Sign-up to get informed when the Midnight Mysteries series has new game released with BD Studio Games' FREE bi-weekly newsletter.