Myths of the World: Of Fiends and Fairies Collector's Edition 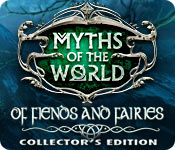 Myths of the World: Of Fiends and Fairies Collector's Edition Screenshots, Videos:

From Eipix, the makers of the successful series Final Cut, Off the Record, and Sea of Lies, comes more Myths of the World. The rat catcher's after more than rats this time.

Where did these pixies come from, and what do they have to do with your grandfather's fairy tales? Play both traditional and silhouette hidden-object puzzles in this dark fairy tale game.

A unique new Q&A puzzle helps you discover your grandfather's tie to the fairy realm. This is a special Collector's Edition release full of exclusive extras you won't find in the standard version.