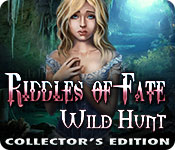 You have been summoned to the town of Osville, where a legion of spirits controlled by the Four Horsemen of the Apocalypse roams the streets in search of one young girl.

Only the mysterious prisoner in the tower knows how to save the city… But you’ll have to get to him first!

Uncover the secrets of the Wild Hunt army, and learn the truth behind the prisoner’s ultimate betrayal in this mesmerizing Hidden Object Adventure game! This is a special Collector's Edition release full of exclusive extras you won’t find in the standard version.