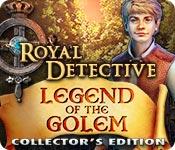 Elephant Games is back with a new case that only the Royal Detective can solve!

The peaceful town of Glanville is under attack!

Each day, a golem arrives, leaving a trail of destruction and terror in its wake!

But each new golem is even stronger than the last, and they're evolving into an unstoppable destructive force.

You've been called in to help defeat the mysterious Master and their stone-cold creations.

With the help of some friends, follow the clues to discover who the Master is and what they have in store for the town.

Find hidden objects and solve puzzles to help you along the way.

The townspeople are counting on you.

Do you have what it takes to help them before it's too late? See what our Beta testers had to say: "Graphics were high quality, clean and crisp.

Game play was quite intuitive, and distinctly different from any other game of this genre that I have played.

I am not a fan of mini games, but these were not the same-old, same-old, and I did enjoy them.

I thought Royal Detective: The Lord of Statues was incredible; this one is on track to sweep Lord of Statues under the rug" - Barb, beta tester "I just loved it, the gameplay and minigames were so different!!

Can't wait until it's released!

What a joy to play!" - Suki, beta tester