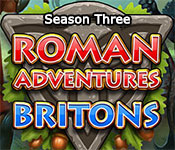 The Roman Adventures: Britons has released two games in this series, they are very popular strategy games in the casual game market, our players are mostly like the feature that find the hidden caches in these games. Our website has released these two games.