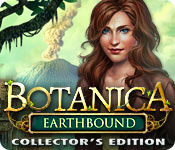 Terror strikes the land of Botanica as a volcano erupts, threatening to destroy everything in its path.

Play as Ellie Wright, a botanist looking for her father who disappeared 20 years ago.

And play as Ian Garrett, a scientist who is trying to get back to his daughter on Earth.

Follow their journey as they try to find their way back to Earth, a move that leads them straight into the volcano's path.

Can you save everyone and get back home before it's too late? Find out in Botanica: Earthbound! This is a special Collector's Edition release full of exclusive extras you won’t find in the standard version.

Sign-up to get informed when the Botanica series has new game released with BD Studio Games' FREE bi-weekly newsletter.