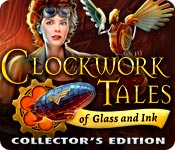 Earthquakes are causing cities around the world to crumble!

Ambrose Ink, one of the foremost scientific minds, has vowed to stop this unnatural phenomenon.

All the clues point to Castle Barber, overlooking the quiet mountain town of Hochwald.

Shortly after arriving though, Dr.

Now it's up to you, Agent Evangeline Glass, to save him.

You'll have to think fast to outwit soldiers, golems, and a crafty mechanical genius who always plans one step ahead.

Stop the earthquakes before more cities fall in this thrilling Hidden-Object Puzzle Adventure game. This is a special Collector's Edition release full of exclusive extras you won’t find in the standard version.

Sign-up to get informed when the Clockwork Tales series has new game released with BD Studio Games' FREE bi-weekly newsletter.