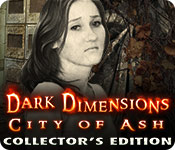 You've been studying the supernatural phenomenon known as dark dimensions since you were very young, hoping that they will eventually lead you to your missing family, but nothing has prepared you for the danger that awaits you in Phoenix Hill, California.

Once a prosperous mining town in the 1950s, a volcanic eruption changed everything.

Now its citizens are trapped as spirits of ash, unable to move on.

Can you uncover the tragedy that caused this dark dimension to appear? While most of the inhabitants are friendly, one fiery ghost will do anything to stop you.

Volcanic tremors are rumbling beneath your feet.

Will the volcano erupt again? Watch your step in Dark Dimensions: City of Ash, a sizzling Hidden Object Puzzle Adventure game. This is a special Collector's Edition release full of exclusive extras you won’t find in the standard version.

Sign-up to get informed when the Dark Dimensions series has new game released with BD Studio Games' FREE bi-weekly newsletter.