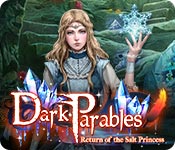 The Old Town located beneath the ruins of Grak Kingdom has been rapidly turning into salt in the past few days.

This salt-transmutation appears to be caused by a mysterious species of white dragonflies.

The Princess of Grak Kingdom went missing a hundred years ago.

The Grak Palace also inexplicably collapsed at around the same time.

However, a girl who might be the Princess has been sighted in the Old Town recently.

You (Detective) are requested to find the Princess and solve all the mysteries behind the salt-transmutation.

As you approach the ruins, you are attacked by an abnormally strong man with hostile intent.

With the help of two sisters imbued with special powers, you are narrowly saved from peril.

As you delve deeper in the case, you find hints that this mystery might be linked to a case that you investigated long ago...