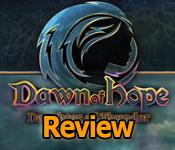 As always, try the demo first.

I really got into the story when the demo ended.

For some the puzzles might seem very easy but I am guessing that most gamers enjoy puzzles that are not "rip your hair out" difficult.

The graphics are excellent with good voiceovers but it is a bit odd that the lip-syncing seems to be a hit or miss sort of thing.

The Mini Games are numerous and entertaining, and most of the puzzles give you the option to play the game in either an Easy of Hard mode which is a feature I really like.

I've been playing this game for 2 hours and I still quite a ways to go.

The Mini Games are very doable, most are of good length and entertaining.

The hidden object segments and the puzzles during the demo, which was quite short by the way as I finished it in 42 minutes.

The Mini Games are easy to medium in difficulty.

There is a good jump map available, that shows where an available task is located, One of the reason's I liked this game better than the last, is that there are a ton of Mini Games, most of which are super easy.

Map: The map tells where the player is and has the special mark when you have something to do there.

Many of the scenes have puzzles incorporated as well as some interactivity when it comes to finding many of the items.

In my opinion, seek and enjoy!

If you prefer the CE version of games the Dawn of Hope: Daughter of Thunder has collectibles, artifacts and morphing objects to be found.

The storyline does a nice job also.

The graphics are beautiful and, yes, icy but perfect for a cold and rainy day here in my town.

We played Dawn of Hope: Daughter of Thunder on the easiest difficulty mode, rarely skipped any puzzles, and completed the game in around four hours.

Sign-up to get informed when the Dawn of Hope series has new game released with BD Studio Games' FREE bi-weekly newsletter.