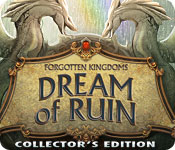 Can you find a cure in time - or will both your lives be forfeit to Selene's visions? Find out as you travel through distant lands in this exciting Hidden Object Puzzle Adventure game! This is a special Collector's Edition release full of exclusive extras you won't find in the standard version.