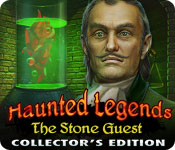 From ERS Game Studios, creators of the Dark Tales, Haunted Legends, and Grim Façade series, comes a haunting new legend to explore! Your friend, a brilliant doctor, thought his artificial heart would be the cure for his dying son.

But soon after, orphans of the town began to mysteriously vanish, and the town accuses the doctor of black magic.

Who is behind these devilish doings? Can your detective work unravel the mystery before the hearts of the captured children stop beating forever? Find out in this exciting Hidden Object Puzzle Adventure game! This is a special Collector's Edition release full of exclusive extras you won't find in the standard version.