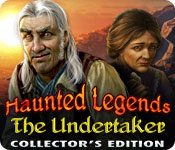 Take on a chilling new case in this thrilling Hidden Object adventure! This is a special Collector's Edition release full of exclusive extras you won’t find in the standard version.