Legends of the East: The Cobra's Eye Collector's Edition 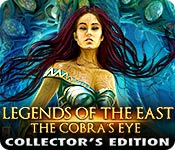 Stop a devastating war and save the man you love in Legends of the East: The Cobra's Eye!

A long-forgotten artifact has just resurfaced, and evil forces are racing to claim it.

To make matters worse, the love of your life, Daniel, has somehow gotten himself mixed up in the mess.

Now you must find Daniel and uncover the truth behind the legendary Cobra's Eye before the fate of the world is changed forever.

Your destiny awaits you in this thrilling Hidden Object Puzzle Adventure game! This is a special Collector's Edition release full of exclusive extras you won’t find in the standard version.

Sign-up to get informed when the Legends of the East series has new game released with BD Studio Games' FREE bi-weekly newsletter.