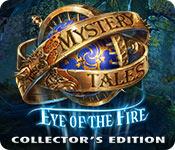 Domini Games proudly presents the next installment of the Mystery Tales series!

You've been called in to investigate the dark nightmares of a young woman.

What starts as a simple investigation quickly takes a dangerous turn as a witch from the past comes back to take her prey!

Can you uncover old secrets and save the town before it's too late? Find out in this exhilarating Hidden-Object Puzzle adventure!