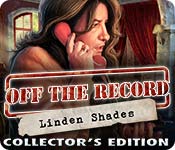 A mysterious figure in red… Something’s driven everyone away from Linden Shades.

No one’s been back since that time of terror when the kids drew startling images of blood-red ghosts, and the police were no help.

Your editor’s sure there’s a story hidden in the Shades.

Can you get the truth, off the record? This is a special Collector's Edition release full of exclusive extras you won’t find in the standard version.