Princess Isabella: The Rise of an Heir Collector's Edition 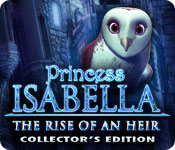 After nearly defeating the Witch, Princess Isabella was turned to stone and her child was rescued by her trusted friends Fairy and Dragon.

Raised alone, with no idea of her lineage, young Princess Bella must rise and take back her kingdom.

Join us for the exciting conclusion to the Princess Isabella trilogy.

The Heir will rise!

Sign-up to get informed when the Princess Isabella series has new game released with BD Studio Games' FREE bi-weekly newsletter.