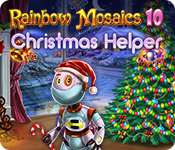 Your amazing robot helper is back to bring you some Christmas cheer! When a young couple brings Helper into their home to assist with the holidays preparations, they soon find that this arrangement was more than they bargained for.

It's clear something has gone wrong when Helper hangs sausages from the tree and places ornaments in the soup!

It's most likely a flaw in Helper's configuration.

Solve these delightfully festive mosaics puzzles to get Helper on track.

Sign-up to get informed when the Rainbow Mosaics series has new game released with BD Studio Games' FREE bi-weekly newsletter.