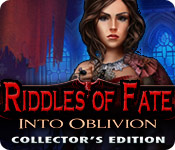 Will you return Riddlestone to its former glory, or it will be swallowed forever by the darkness? Find out in the exciting hidden-object puzzle adventure Riddles of Fate: Into Oblivion! This is a special Collector's Edition release full of exclusive extras you won’t find in the standard version.