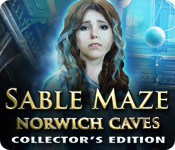 Dig deep and keep your head above water in Sable Maze: Norwich Caves, an intriguing Hidden-Object Puzzle Adventure game. This is a special Collector's Edition release full of exclusive extras you won’t find in the standard version.