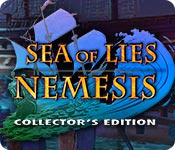 Can you find out how these men died, how they’re all connected, and most importantly, who killed them? This murderer’s calling card is your nemesis in this exciting continuation of the Sea of Lies series. In this exciting Hidden Object Puzzle Adventure game, you’ll use a forensics kit to examine murder scenes and look for clues.