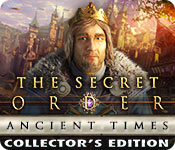 You have been summoned to the headquarters of the Order of the Griffin, but the place is in a state of chaos when you arrive.

The artifacts you recovered in your last adventure have become unstable, breaking down reality and trapping your father!

Now you must travel back in time to destroy the artifacts before the reaction destroys the world.

Can you track down the mysterious kingdom where the artifacts were made and save the future from destruction? Hop aboard the Royal Griffin to find out in this thrilling Hidden Object Puzzle adventure game!