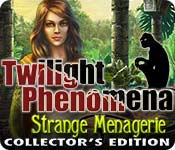 When your cousin Mary goes missing, you rush to Mexico to find her.

Posing as a volunteer in a secret experiment, you begin to explore the mansion where Mary is being held.

But when you start to see bizarre creatures creeping around the house, you quickly realize that the experiment you signed on for has shocking results.

But who is behind it all...

and why? Can you save Mary and escape the house before you both become victims of the villain's deadly science? Find out in this thrilling Hidden Object Puzzle Adventure game! This is a special Collector's Edition release full of exclusive extras you won’t find in the standard version.