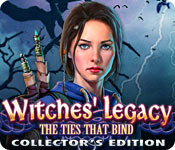 It seems like only yesterday that Lynn was just a little girl, but now she's all grown up and marrying Edward.

You couldn't be happier for your adopted daughter - until you discover that Edward is missing!

A mysterious letter promised answers to his past, urging him to return to his birthplace.

As a witch hunter, Edward is accustomed to danger...

but he may have gotten in over his head this time.

You and Lynn rush to follow his trail, unaware that a dark presence is watching you.

Can you track down Edward in time? Find out in this exciting Hidden Object Puzzle Adventure game! This is a special Collector's Edition release full of exclusive extras you won't find in the standard version.

Sign-up to get informed when the Witches' Legacy series has new game released with BD Studio Games' FREE bi-weekly newsletter.