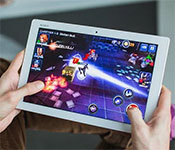 At the dawn of the gaming industry, only those developers got rich whose small teams in the future turned into real corporations. Today, snatching a piece of the pie in this area has become more difficult due to the abundance of competition, but even an ordinary player, if there are a desire and talent, can get his share simply for competent knowledge of the rules of his favorite game.

In our article on the TOP 3 ways to make money on games, we present three of the most popular and easy options that can help you replenish your wallet using PC games. Keep in mind that 100% success is not guaranteed, as free cheese is only in a mousetrap. Let's start!

E-sports as a way to earn money by playing games

We'll start at the top of the video game world - that small and incredibly experienced group that makes money in professional tournaments. Only the most seasoned players who have learned their game inside and out make their way into eSports.

They are distinguished by incredible reaction and enviable perseverance, which allows them to train 16 hours a day in the same game.

Alas, for now, pro gaming remains a fairly narrow discipline. The first tournaments are only now starting to be shown on TV, but the audience, as well as the companies that create hardcore e-sports games, is growing every year.

The most popular projects at the moment are Dota 2, League of Legends, CS: GO, and several others. In some competitions, the jackpot reaches tens of millions of dollars, which boggles the imagination - it is obvious that there is a great future behind eSports.

The main disadvantage of pro gaming is a huge competition. All those professional players that you see on the Internet are just a drop among the endless sea of ordinary players.

Besides, the earnings of an esports player are influenced not only by the popularity of their game but also by their skills: to get more, you need to win more often, which is by no means will be easy.

As for the exact numbers, according to Roman Dvoryankin, general manager of Virtus.pro, on average, members of this team receive $ 7,000 a month.

The most highly paid player was a German under the nickname KuroKy, who was able to get two million dollars for winning a Dota 2 tournament.

If you dream of connecting your life with eSports, then you will have to start from the very bottom, as in any other activity. Tens of thousands of gamers are asking for one place in the top team, so you have to first prove yourself in less popular competitions. And if you have talent, you will make a name for yourself step by step and break into the league of the best of the best, where fabulous fees are spinning.

It is worth noting that the work of an esports player is not just a gathering at a favorite game. It is not enough to have just one attachment to this or that game, since a pro gamer needs to train for days, and sometimes even stream, attend press conferences, participate in promotions, engage in their social networks, communicate with fans, and much more.

The most famous platform is Twitch.tv, where anyone can broadcast their adventures in any game to the rest of the world and get paid for it. There are even streams dedicated to online pokies! You can start to play online pokies and earn money not only by streaming the gameplay but also have the possibility to win jackpot inside of the game!

Naturally, no one will immediately pay you for your adventures in virtual worlds. To begin with, you need to recruit an audience, since the main income will drip directly from them.

Viewers can subscribe to your Twitch channel, but the royalties from this deal are extremely small. The key side of the streamer's income is the viewers themselves, who simply donate.

How much money will your fans give you? It is impossible to answer this question since the audience is different everywhere.

If you want to become a streamer and get paid from it, then get ready for the fact that at first, no one will watch you. In any case, you will have to start broadcasting to the "void", and only then, step by step, there is a chance that the viewers will become more than zero.

How to gain an audience faster?

To gain an audience faster, you can buy ads from other streamers, since they, by completing their stream, can redirect their viewers to your channel - only in this way the rest of the world can even know about the existence of your channel.

However, buying advertising and regular streams (and you will have to draw up an iron schedule in any case so that the audience can focus on it) does not guarantee success. A streamer, even with two hundred regular viewers, makes good money by simply doing what he loves - playing games.

That is why hundreds of thousands of gamers dream of being in the same position, which creates gigantic competition. The likelihood that you will not gain a permanent viewer base is incredibly high, so get ready for this outcome right away.

When it comes to streaming, it's best not to bother too much. If you are charismatic, punctual, and have at least a minimal sense of humor, and also play more or less popular projects, then popularity will come to you over time.

There is no easy money anywhere, so get ready to stream for the sake of gaining a minimal audience for literally years.

Some people spend a huge amount of money on clothes in reality, while others prefer to buy virtual cosmetic items. Cosmetic items are a huge reservoir in the current gaming industry that is present in almost all online games (and even some singles).

Cosmetics are purchased by millions of players, which allows the developers of such games-services to earn tens or even hundreds of millions of dollars.

If you have 3D modeling skills, then you can personally create content for such multiplayer projects.

Valve, for example, encourages the community to create: you can create gear for Dota 2 and then get paid for it. The main thing here is to create a really interesting thing so that other users will like it. After that, they may decide to buy it, which will bring you a certain percentage of money in return.

So, according to Valve, in a couple of years about $ 57 million went into the pockets of 1,500 authors of items (38 thousand for each of them). Who knows, maybe you can create such high-quality items that some game company will even hire you to work for them!

Sign-up to get informed when the TOP 3 ways to make money on games online series has new game released with BD Studio Games' FREE bi-weekly newsletter.