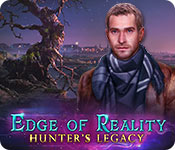 4Friends Games proudly presents their next thrilling adventure in the Edge of Reality series!

When your uncle mysteriously leaves you an old lighthouse in his will, you quickly go to investigate.

But instead of answers, you uncover a secret heritage filled with magical creatures and their ties to your family!

When a dangerous foe aims to destroy their world forever, do you have what it takes to help them before it's too late? Find out in this spell-binding Hidden-Object Puzzle adventure!