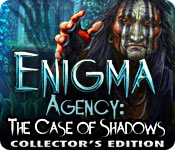 Track a missing detective through the jungles of Central America in Enigma Agency: The Case of Shadows.

Who knows what ancient evil is lurking in the shadows? Become immersed in a world of mysticism, secrets and ancient curses.

Interesting locations, an adventurous plot and mini-games await you in the treacherous jungle!

Sign-up to get informed when the Enigma Agency series has new game released with BD Studio Games' FREE bi-weekly newsletter.