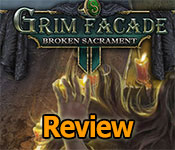 I've been a fan of the Grim Facade: Broken Sacrament series and really enjoyed the games in the series.

We played Grim Facade: Broken Sacrament on the easiest difficulty mode, rarely skipped any puzzles, and completed the game in around four hours.

It's just nice to have a fun and relaxing game to play.

This is one of them.

The Hidden Object Scenes are mostly Interactive List finds, the scenes are beautifully drawn and there are a ton of interactive items.

The puzzles are more challenging, and they are smartly integrated into the storyline.

All in all, Grim Facade: Broken Sacrament is a good game.

Not an amazing one.

Grim Facade: Broken Sacrament is a must-have game for me.

Not only is the game full of things to do, it is also beautiful and just what I have been looking for after all the dreary, colorless games that wrapped up in the past 3 months.

First of all, the landscapes and sceneries in this installment is mesmerizing; filled with exotic locations and interestingly-designed themes.

Graphics: They are absolutely gorgeous.

The animals are totally adorable.

All in all, I find Grim Facade: Broken Sacrament to be an excellent game and a must-have addition to my gaming library.

This time it doesn't get outright booming.

The game flowed quite well and is very easy to follow.

Thanks for the reviews.