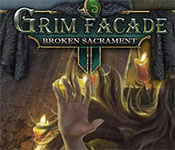 Amax Interactive brings you the newest chilling addition to the Grim Facade series!

When the head of a prominent family seemingly dies at the hands of their deceased matriarch, you're called in to investigate!

Can you find the malevolent culprit on a remote Italian island in time, or will you fall victim to an ancient curse? Find out in this spine-tingling Hidden-Object Puzzle adventure!