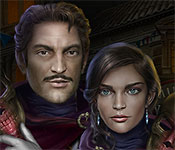 Thank you for coming so quickly.

We're being watched even as we speak.

Yesterday, my museum was broken into and turned upside-down, today, the criminals were waiting for me in the street, I barely escaped, they're looking for the Cube, It's an incredible artifact, See for yourself.

This is what's needed for the Carnival of the Black Cube, it's in full swing now, but we can't let the Cube fall into the wrong hands, or it will kill us all!

Allegra is a historian, she helped me get access to the city archives, where we learned - Oh, I'm so foolish, someone might hear, let's continue this conversation inside the museum.