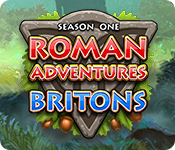 In ancient times, the Roman Empire was actively expanding its borders.

To conquer the northern lands, Caesar sent General Flavius to the British Isles where the Roman Army set out to subdue the proud Celtic people.

Soon after reaching their destination, preparations for battle were underway.

Little did either side know that a mysterious and dark force called the Filth was converging on Briton.

Instead of fighting each other, General Flavius and the druid elder would have to work together to fight back this evil power that seemed to be devouring everything in its path.

Help them beat back the Filth before the entire world is threatened in this exciting strategy adventure game!

Sign-up to get informed when the Roman Adventure series has new game released with BD Studio Games' FREE bi-weekly newsletter.