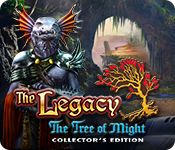 The Legacy: The Tree of Might Collector's Edition Screenshots, Videos: