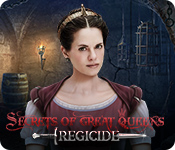 The King of France has been murdered, and the Queen is the prime suspect!

You've been called in by Her Majesty to investigate.

It's up to you to clear her name and find the true culprit.

Do you have what it takes to disrupt a dangerous plot before it's too late? Find out in this thrilling hidden-object puzzle adventure!

Sign-up to get informed when the Secrets of Great Queens series has new game released with BD Studio Games' FREE bi-weekly newsletter.