The Enthralling Realms: An Alchemist's Tale 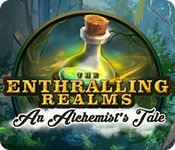 Ever since they were children, Coral and Iris have trained to become powerful alchemists.

They both show great potential, and Coral's potential is matched by great ambition.

But ambition can be dangerous.

Stricken with grief and expelled from the academy, Coral sets out on a journey to master her skills as an alchemist and find a way to save Iris.

But is it possible to revive the dead? And can Coral find these answers while selling potions and talismans to the people who need her help?