Wanderlust: What Lies Beneath Collector's Edition 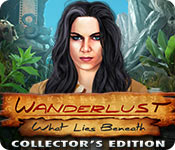